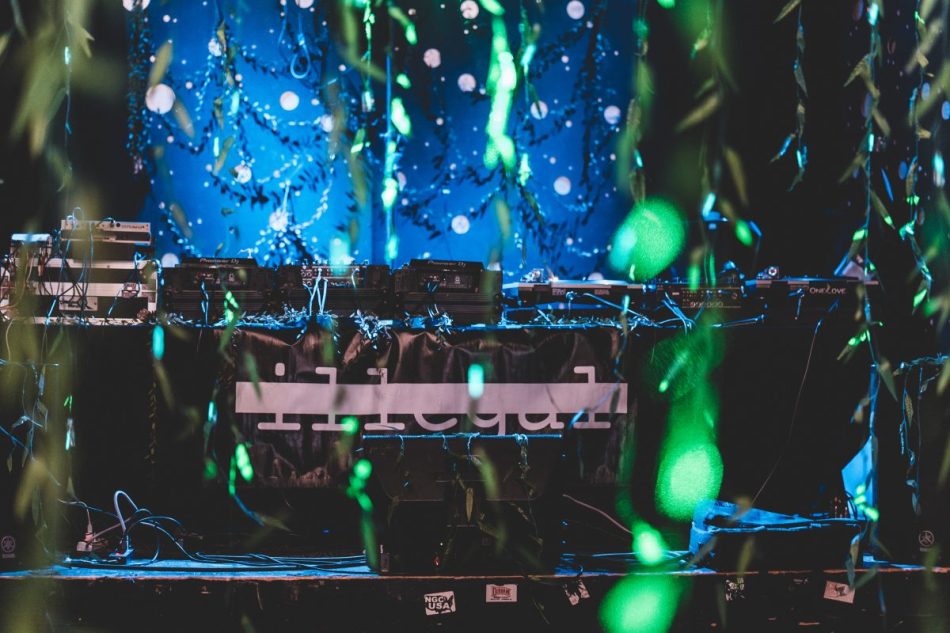 When I arrived at Pinhook for the Party Illegal show this past Saturday, I found a parking spot directly in front of the venue. Never once has this happened to me, so I knew this was going to be a special night. The karma was a-glowin’, y’all. Upon entering the venue at precisely 10PM, I was surprised to see a scant space nearly devoid of humans. I found Durham Beat photographer, DJ, adjusting the settings on his camera to the green laser lights and smoke machine. From the ceiling hung strings of green leaves decorated with tiny green glow sticks. The verdant aura painted a spritely scene of Spring, even though it was a brisk 38 degrees outside. Puckishly, I strolled over to the bar where I saw Patrick (Treee City) wandering about, ordering a mezcal before the start of his set. Hugs followed. And moments later he took the stage, easing into his set with some deep droney noise.

While Patrick’s set moved from drone to ambient, with a touch of house, I clutched my Guinness tallboy, crossed the empty dance floor, and nestled into a wallflower pose, watching the humans slowly trickle into the show and start dancing. It didn’t take long for the room to fill up and for me to mosey over to the bar for another beer. For an hour, the sounds of Treee City bombarded the venue space with massive waves of bass. As the night went on, the bass would only get heavier, the sound waves more aggressive, the rumble of the floor making me my heart seemingly beat to the rhythm of the music.

With no interlude between sets, DJ Jules took over from Patrick for the second set, one of the loudest of the night. Between flipping through various vinyl and singing and talking to the audience with the lone microphone, DJ Jules’s set was absolute fire. Heavily rooted in percussion and bass, this set made the doors in the bathroom shake, the bucket ashtrays out back vibrate on the picnic tables. By the midpoint of her set, the show had become a dance party, so much so, that a young woman climbed up onto the stage into the artist’s performance space to dance, seemingly in a drug-induced rapture, until someone escorted her off when it became apparent that she was distracting the artist. Not long after she would make a second attempt to dance on the stage, but would be quickly removed. At the start of Oliver Long’s set, Photographer DJ and I saw her and her companion with coats on, drinking water by the front door, perhaps waiting for an Uber or Lyft, but we’ll never really know.

As Oliver Long began his set, the third of the evening, Patrick found me in the crowd swaying with the dangling greenly-lit leaves and invited me downstairs into the green room for some heady discourse. Trandle, who had come to the show, joined us as we conversed in the cozy artist hangout while Pulp Fiction played on the Roku-powered TV. Moments later the door to the green room opened and Sinistarr, the night’s headliner, came in and joined our little circle. After a round of introductions, we fell into conversation, touching upon a number of topics, from cold, snowy places to trolley bars to the new Detroit. The common thread in the ensuing conversation was the development and changescape of cities. Sinistarr spoke a great deal about the new development of Detroit and how even in just a few years since the city began its turnaround from industrial wasteland, it has become a new city filled with new people with new value systems and new money. “It’s called #NewDetroit,” he said. The obvious parallels to the development of Durham and the Triangle as a whole were easily apparent to all of us.

As the clock neared 1AM, Sinistarr started prepping for his set, while Patrick, Randy, and I headed back into the showroom for the much-anticipated headliner. Author of several groundbreaking releases and a veteran of Detroit’s music scene, Sinistarr’s set was a poignant display of the many nuances inside ever-evolving world of electronic music. Watching him interact with his instruments on stage, his precision and simultaneous comfortability were reminiscent of the necessary skill and exactitude required in movement of fingers and hands upon piano keys. I felt distinctly like I was in the presence of a master.

Head over to our Instagram to see the two photo series from the show by Durham Beat Photographer DJ.