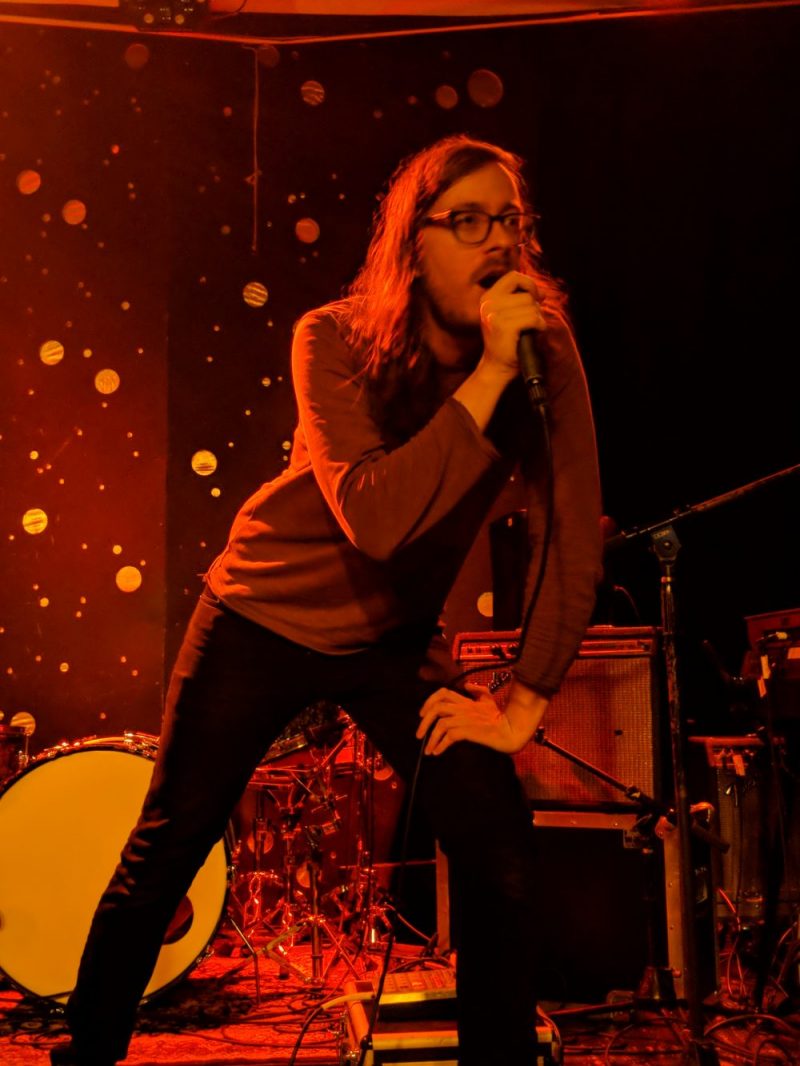 I composed this post-show writeup in my head several weeks ago. The demands on The Editor during those same weeks have forced me to carry this piece around with me while tending to the growing business of The Beat. Only now, long after the happenings have happened, have I been able to attach these words to the page. I could list the reasons why it has taken this long, but none of that will matter to the musicians who have been waiting for these words. I deserve to scathe myself because of this tardiness. And yet…

…right at this very moment I am sitting on my stoop with a cold beer, headphones on listening to that Jimi Blues, writing these words on actual paper, and feeling positively grand. I ruminate still on that August 3rd show.

“Look for a black hat with red roses on it, and a tiny pencil.” That’s what I said to Real Dad when I told him how to find me at his show. He had invited me, you see, to come as Durham Beat for his Friday night show at The Pinhook. I got all dressed up in my Editor uniform and casually made my way over to the show.

I rolled into The Pinhook moments before Case Sensitive took the stage. I went over to the bar and ordered a Natty Bo before heading to my usual front of crowd place. I soon realized I was missing something key and scurried back over to the bar for my ritual pre-show shot of Jameson. The bartender poured the last of the bottle out into the shot glass, then opened another bottle and topped off my miniature beverage. The girl next to me at the bar looked over at me and said, “You inspire me.” “Oh really?” I responded skeptically. “Yeah, I’m going to get a shot too.” I threw back the shot of brown and remarked, “It’s a good idea,” then made my way back to the front as Case Sensitive emerged from sound check and began their set with heavy guitar, deep bass, and wild drums. I recognized the song immediately. “Six Feet” is the second track from their two-sided single released earlier this year. I had done a little writeup about the release back then. In fact, it was the first piece I ever published on Durham Beat. I knew the song well, having listened to it dozens of times while dusting off my rusty journalist voice. I had seen Case Sensitive for the first time at a their album release show at The Station. They were every bit as glamorous as I remembered. Sporting casual black attire, the ladies rocked out, at times switching instruments with each other for different tracks. Ethereal female vocals combined with raucous stoner-rock-styled guitar riffs and a general DGAF attitude, all live at the heart of Case Sensitive’s sound. These women are not only inspiringly talented, they are decidedly true-to-self.

By the end of their set, the crowd had grown considerably. Their exuberant cheering for the all-female Carrboro-based rock trio was welcome noise to my ears. I am always gratified to bear witness to outpourings of love towards artists I’ve written about.

During the interim set switch, I found Real Dad over at the merch table, merch-less, and selling on behalf of the other bands. “I know you go by The Editor, but what’s your real name?” he asked me. To be clear, Real Dad’s real name is Nolan Smock. Many of you reading this raggedy writeup know this already, but in the world of gonzo journalism, staying true to character identities is a tenet of this artform’s authenticity. True-to-self was very much the theme of the night, as Real Dad’s set on this particular evening was an expression of personality and vulnerability. But before I get into all of that, I would be remiss to dismiss the second set from out-of-towners Moon Ruin, a synth-heavy four-piece from the midwest (Peoria, IL and Eau Claire, WI), who were passing through our dirty little city in support of an album released earlier this year.

Because of my experience covering Moogfest, the synth-centric art/tech festival hosted in Durham in the springtime, as well as innumerable other run-ins with electronic music, I have been a bit spent on the genre of late. Thus I must admit to you, dear reader, that while I found Moon Ruin to be of sound musicianship and their set of excellent quality, I was in no position to appreciate synth-centric sounds on this night. During their set, in between moments of Bon Iver-esque solemnity and sounds broadly resembling synth-inspired art rock, I fantasized I was in room with some string players and a harmonica. There may have been a piano there too. Lately I find myself craving the familiar noises of traditional musical instruments. I was drawn back into Moon Ruin’s set by their drummer, whose natural rhythm and energy lifted me from my synth-evading daze and yanked me back into the show. I made a point of finding him at the end of the night to thank him.

Following a brief tobacco-stained interlude between sets, I once again found my front of crowd place for what would be a wholly inspired set from Real Dad. In an atypical gesture, he announced to the crowd that “Durham Beat is in the house.” While I usually prefer to slide under the radar of showgoers, I am always happy to receive some public love from artists–since they do so often receive it from me, even if it is a tardy, self-deprecating, oddly poetic piece of prose. Real Dad did a solo set with the technological accompaniment of a sampler, while switching back and forth between guitar and bass. I have seen many one man shows in which the artist employs the aid of tech to make a set come to form, but those sets have always tended to be a bit ostentatious and sometimes overly technical. Real Dad’s setup was comparably modest. The man himself came across to me throughout our encounter as decidedly modest and comfortable in being vulnerable in front of people. I managed to capture on video the moment during his set where he quite literally shook off whatever inhibitions might have been plaguing him and he started to dance, slowly letting himself go, sliding fully into his Real Dad persona. Don’t worry y’all–I posted it on Instagram so you could share in the moment too.

Real Dad’s sound is not genre-specific. Real Dad is not a band. Real Dad is a music act intended to rouse your humanity, your uncomfortable self, the vulnerable you, to bring all of that into the light where it doesn’t matter if you dance like an al dente noodle, or if you cried a little bit during that one song, or if your heart is broken and there’s nothing you can do to hide it from anyone who might glance your way. I walked out of The Pinhook on Friday, August 3rd in an emotional state. Real Dad had summoned in me an acute awareness of some of my own vulnerabilities, so much so that in posting this piece now, as tardy as it is, I am laying myself open to all of you. And that’s okay.

Immediately following the conclusion of the night’s sets, I had the pleasure of conducting a Raw Bites Session with both Real Dad and Case Sensitive in the downstairs green room of The Pinhook. Our conversation touched upon many topics, not the least of which was vulnerability. Please enjoy.