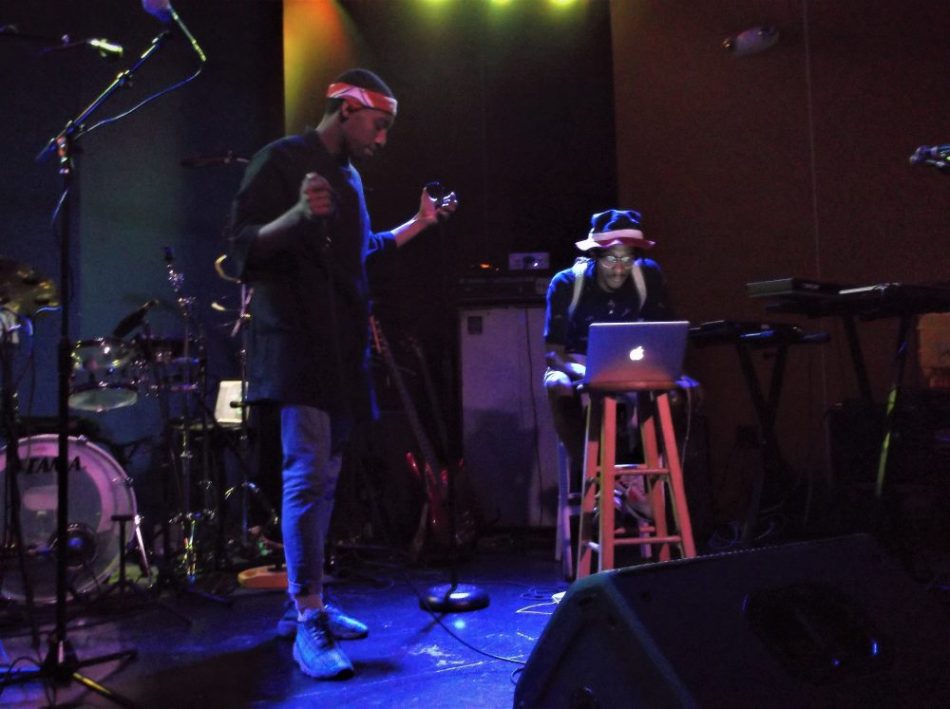 I underestimated the weekend crowd yet again and found myself with no place to park. Weaving around every Trolley Pub blocking traffic, I finally found an open space right by the door of my favorite bar. I stopped in for a quick shot of whiskey, then started on my merry way. Following the will-it-won’t-it storm cycle of recent weeks, I expected a downpour at any moment during the night. I lucked out and it didn’t rain a drop during my walk to King’s, but I brought my umbrella along just in case. After a notably fearless speed-walk in heels, I got to the show in one piece and without a moment to spare.

Durham native Emily Musolino is out touring with her newest album The Vault, which was released in April.

Performing a song off the album, ‘Flavor Of The Month’ was introduced as a tune about that new person in your life you’ve just met, and they’re alright for now, but definitely not someone you’d want to spend the rest of your life with. I knew the feeling too well. It was in that moment that I glanced down at my phone to check the time, and saw that I received a text the minute before, from a male from the previous night. That was all the sign I needed to move on from this “flavor.”

There’s certainly a storytelling aspect to her music, but I enjoyed that it didn’t stop at just storytelling; it was also a conversation.

Emily Musolino: “After a breakup, the typical thing to do is to find a rebound, right?”
Random Audience Man: “ABSOLUTELY!!!”
That’s when she played “Rebound,” a perfect segue from the little chat with the crowd.

The audience doubled in size during the set and the background noise had grown to a dull roar. Emily asked for the chatter to cease while she performed the last song.

“Chatter??”
I turned around in disbelief to see where the voice came from. It was from a man wearing Sperrys and a baseball cap (backwards), with a pink shirt and khaki shorts- so, you know, the typical Raleigh asshole.
Typical Raleigh Asshole: “Free Bird!”
My bet was that he’d already been kicked out of Boxcar for the night and had nothing else to do.

Half of the crowd paid her no mind and kept talking.
The other half were statuesque and never took their eyes off her.

* PSA: If you get to any show early and the opening artist is still on stage, then shut the fuck up and let them play. *

I found all of Emily’s songwriting to be eerily relatable, with a style that I couldn’t quite pin down. It was genre-spanning from the first blues song about dancing with the devil, to foot-stomping rockabilly about her “White Trash Ex-Girlfriend,” to the last song, the heartbreaking and folksy “February Wind” lamenting a love gone wrong.

Ace Henderson is a rapper from Brooklyn who calls Raleigh his second home. This much was apparent through the locale in his songs, like the one about driving down Western Boulevard. I was broadsided by the genius as much as the brevity of his songs. We all begged him to continue, and he only replied that if we wanted more, we would have to go check out his SoundCloud. I made a mental note to do just that.

For his last song, Ace got down off the stage and the crowd circled around him, dancing. En masse, we swayed back and forth in a two-step, and then it was over as quickly as it had begun. The set was the musical equivalent to the Sunday samples at Costco, except this is something you’ll actually want to buy at the end. It was so good, but so short, it was almost unfair.  The fact that something this fresh came out of Raleigh gives me hope.

The two guys behind me started conversation as soon as the lights went up:

Guy #1: “that was like–interactive.”
Guy #2: “yeah, he literally brought the crowd together.”

As the band took the stage and the house lights dimmed, echoes of “OHHHH SHIIIIT!” swept through the crowd before a single note had been played. Their fanbase is loyal AF.  Me, in my fully-sequined silver blazer, didn’t feel out of place for once. This was the first time in years that I’d been in downtown Raleigh and not seen a single Mac DeMarco dress-alike. I gazed around at the beautiful, diverse audience and wondered where all of these amazing people have been hiding out in Raleigh all of this time–until I realized they all came from Durham.

A man and woman to the left of me started grinding during the first song, then after making out, immediately left together. They weren’t wrong. The silky smooth bass + sax combo had everyone feeling all the feels. The man on my right asked me to dance with him. I have no rhythm, but I obliged to a stumbling salsa. He decided to take me for a spin, and the tote bag I was carrying on my shoulder spun as well, hitting the woman behind me. That sure killed the mood. I spent the rest of the night wondering whether I should apologize for the 100th time, or if I should stop after the 99th.

NiiTO was described to me as one of the best bands to come out of Durham’s NC Central University. They lived up to their reputation. It’s feel-good music for sure and it wasn’t long before the smell of the weed wafted to the front in waves. It first began less than 5 minutes into the set, but by the end of the show, the scent hung in the air, which I thought was a little rude… because no one offered to share.

Walking on the street back to my car, I came across a saxophonist who had an accompanying sign explaining that he was busking to raise money for his $64,000 tuition at Berklee. In passing, I wished him well, as the notes floated away into the night.